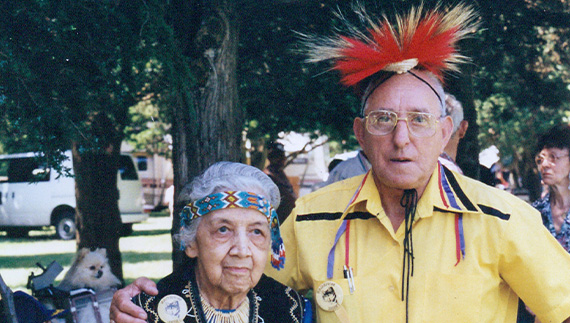 Chief Ralph W. Sturges was born December 25, 1918 in New London, Connecticut to George and Alma Dunn Sturges. He spent much of his life in service to others.

Chief Ralph W. Sturges was born December 25, 1918 in New London, Connecticut to George and Alma Dunn Sturges. He is the great grandson of former Tribal Chair and Medicine Woman Emma Baker. He married Ida Page, who predeceased him, on September 9, 1952 and they had one son Paul.

Chief Sturges spent much of his life in service to others. He worked for the Civilian Conservation Corps, assisted in the recovery efforts in Southeastern Connecticut from the devastating 1938 hurricane, served as Public Relations Director for the Salvation Army and also served on the Board of Directors for the Connecticut Hospice in Branford.

During the 1980s Chief Sturges served as a member of the Mohegan Tribal Council, chaired the Tribe's Burial Committee and was elected Tribal Chairman in 1989. He continued in that role until 1996 when he stepped down due to health reasons. Ralph was elected Lifetime Chief by the membership in 1991 and the late Medicine Woman Gladys Tantaquidgeon bestowed on Ralph the Mohegan name G'tinemong which means He Who Helps Thee.

During his tenure as Chairman and Chief, Ralph was instrumental in forging the relationship with Trading Cove Associates to develop Mohegan Sun. His personality, charisma and genuine acceptance of differences of opinion made him a respected man and enabled him to reach agreements with governmental leaders to accomplish what the Tribe has today.

Most days Ralph could be seen on the Mohegan Reservation wearing his signature ball cap with a Chief pin attached.

Chief Sturges lived by his motto - Honor, Integrity and Perseverance.

Federal recognition enabled the Tribe to build Mohegan Sun, one of the largest and most successful casinos in the world. Ralph was instrumental in opening doors on Wall Street to get financing for Mohegan Sun, the first tribe in the United States to do so. Chief Sturges worked directly with then Governor Weicker to finalize the compact between the Mohegan Tribe and the state of Connecticut which included the return of Fort Shantok to the Mohegan people.

In 1966 Ralph became a marble sculptor, a lifelong passion that places him in a long line of great Mohegan carvers who were also chiefs. His first work was a trout leaping out of water.

His local artistic contributions include the donation of a sculpture of a whale (the Connecticut State Animal) to the late Governor Ella Grasso, and the presentation of a relief carving of Uncas' Mark to Uncas Elementary School in Norwich, Connecticut. Ralph also carved an Indian head logo (designed by the late Mohegan Tribal member Michael Cooney) for Montville High School in 1986 and the base for the repatriated Samuel Uncas gravestone in 1992. He donated a sculpted whale for New London's 300th anniversary and a sculpted lighthouse to the United States Coast Guard Academy in New London in honor of Admiral Clark's passing. His work is also part of the cornerstone of Mohegan Sun.

Chief Sturges served his country during World War II as a security and intelligence officer and gunnery expert in the United States Army intelligence division in New Guinea and the Philippines. He received the Asiatic-Pacific Campaign Medal with two Bronze Stars for his service and also received a Meritorious Service Award, a Presidential Citation, a Good Conduct Medal and earned five Battle Stars. His first duty station was close to home at Fisher's Island, New York.

Throughout the 20th century, the Mohegan Tribe looked to its succession of chiefs for guidance during this difficult time of increasing pressure on Tribal customs and traditions.
Learn about Chiefs of the 20th Century