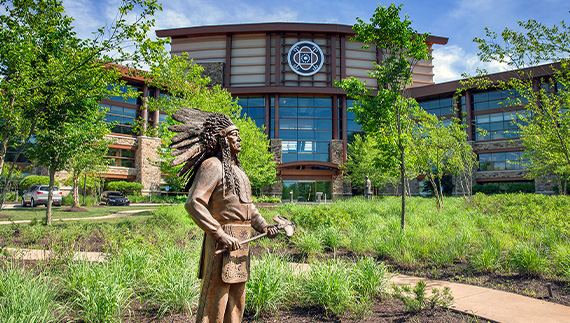 The Mohegan Tribe has cultivated and developed a longstanding relationship with the government bodies and officials not only on a state, but on federal and international levels.

The Mohegan Tribe has cultivated and developed a longstanding relationship with the government bodies and officials not only from the state of Connecticut, but also nationally, all the way to the presidential administration.

Currently, the Tribe pays 25 percent of its Connecticut slot machine revenue to the state in lieu of taxes. Additionally, the Tribe pays approximately 30 percent of its online gaming and sports wagering revenues to the state, an agreement that came to fruition after the Mohegan Tribe worked with Connecticut Governor Ned Lamont, and the Mashantucket Pequot Tribal Nation to these gaming options available to state residents. The money contributed to the state helps pay for necessary local services in Connecticut cities and towns. These funds transferred to the state then are then directed toward local towns to help the communities. Since October 1996, the Tribe has given more than $4 billion to the state.

The Tribal Council continually meets and works with numerous delegates from the Connecticut legislation to strengthen the government-to-government relations between the Tribe, local towns, region, and state. Members from the Council also work with the presidential administration on issues pertaining to the country. Tribal Council Vice Chairwoman Sarah Harris, along with eight other Tribal leaders from across the nation, met with the Biden Administration to discuss the American Rescue Plan and provide recommendations as to how the $20 billion allocated for Indian Country should be formulated. The Tribal leaders in attendance each represented a region of the country and spoke on behalf of the nearly 600 federally recognized tribes.

Recently, President Joe Biden announced the appointment of Chief Many Hearts, Dr. Lynn Malerba to serve as Treasurer of the United States, making her the first Native American to serve as

the nation’s Treasurer. In her position, she oversees the U.S. Mint, the Bureau of Engraving and Printing, Fort Knox, and the new Office of Tribal and Native Affairs that coordinates Tribal relations across the Department.