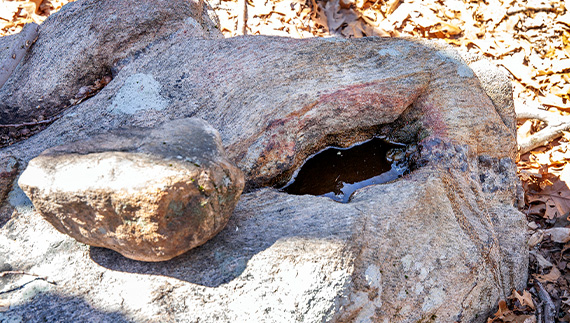 Moshup the Giant represents the large and great beings and can be found in stories told by the Mohegans, Wampanoags and other coastal tribes.

In Mohegan tradition, as in all indigenous cultures, balance is important. Moshup the Giant represents the large and great beings. To maintain balance, he marries Granny Squannit, leader of the magical woodland Little People.

Moshup figures in stories told by the Mohegans, Wampanoags and other coastal tribes. In one story, when Moshup was trying to build a bridge between Martha's Vineyard and the mainland, a crab bit his toe, causing him to leave footprints all over the area. In another version, he gets so irritated, his feet turn fiery red before he stomps his footprints about. This same fiery temper caused him to throw stones all over Connecticut, explaining why the landscape is so rocky.

Like Granny Squannit of the Little People, Moshup has power over the forces of nature. Bad weather is the result of Moshup arguing with Granny Squannit. For coastal tribes, Moshup and his family become whales, symbolizing the ancient bonds between land and sea creatures. Moshup is blamed by some tribes for rough seas.

According to Mohegan tradition, Moshup's Rock is one of the footprints left by Moshup the Giant. Like many sites, Moshup's Rock carries different names, depending on culture. The Mohegans call it Moshup's Rock. Christian missionaries changed the name to the "Devil's Footprint" as a way to demonize Tribal traditions. 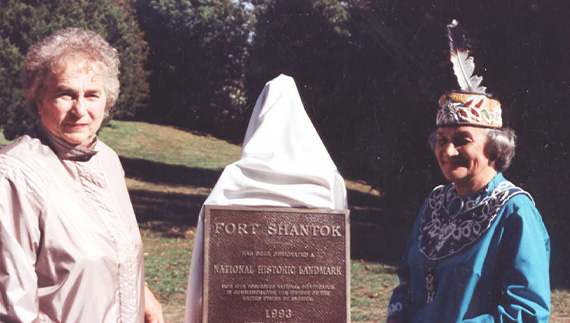 In 1993, Fort Shantok was designated as a National Historic Landmark.
Click here to learn more about Fort Shantok