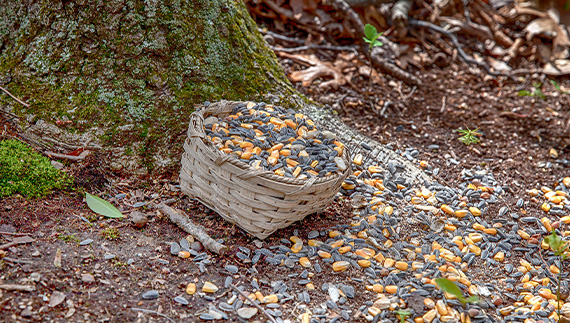 Makiawisug, or the Little People

The rocks of Mohegan Hill are the home of the Makiawisug, or Little People.

Makiawisug, or the Little People

The rocks of Mohegan Hill are the home of the Makiawisug, or Little People. After nightfall, the call of the Whip-poor-will signals their arrival. They are good spirits, but the Mohegans know they must be treated with respect, according to tradition. It is important to leave baskets of food, such as corn cakes and berries, or even meat in the woods for them. Wearing moccasin flowers for shoes, they gather the gifts at night. In fact, Makiawisug means "whip-poor-will moccasins."

They have their own rules of etiquette. Those who see the Little People should not look directly at them, they think it's rude. If they catch you staring, they might point a finger at you, rooting you to the ground, while they take your belongings. Another rule is don't speak of them in the summer, when they are most active.

But in return for kindness, they taught the Mohegan people how to grow corn and use healing plants. They keep the earth well and grant favors for those who honor their ways.

When the English settlers came and disrupted the traditional way of Mohegan life, many forgot to help the Makiawisug. As a result, many Mohegans and Makiawisug fell ill. At this time of Bad Spirits, there lived a medicine woman. One night, during a terrible storm, she heard the whip-poor-will. When she looked outside, the bird wasn't to be found, but a small boy stood in the rain on her doorstep. It turned out he was a grown Makiawisug named Weegun, who told her to come help someone who was sick. Though the storm was fierce, he led her through the woods a long way.

Suddenly, the storm seemed to stop as they began to descend into the ground. They were in the realm of the Little People. Weegun led her to a beehive shaped chamber of rocks. Inside, a very old woman lay in bed, very ill. The Makiawisug told the medicine woman that this was Granny Squannit, who must be made well. Granny Squannit is very powerful, and she is known to cause storms when she argues with her husband. Her illness was the reason for this storm. Worse, healers often look to Granny Squannit when the need is dire for help in healing, and here she was the one who was sick. The medicine woman treated Granny Squannit for nearly a moon before she got better. In return for restoring Granny Squannit's health, the Makiawisug gave the medicine woman a basket of gifts and told her to remember them. She was blindfolded and taken back home.

Only when she returned did she open the basket. Inside were quartz crystals, painted skins and bunches of herbs.

Small baskets were created to leave offerings of food or goods in the woods for the “Little People” that lived there so they would not cause mischief.
Learn about artifacts